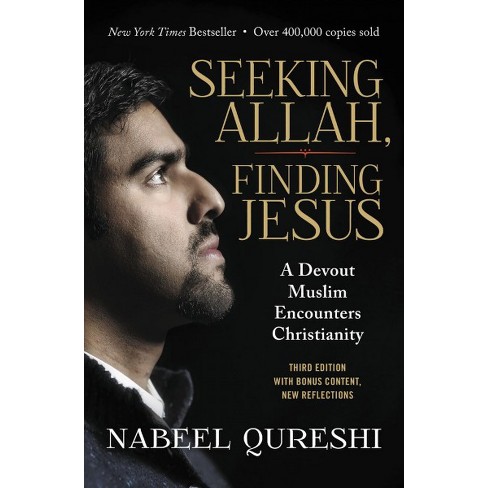 This past week saw the release of the 3rd edition of Nabeel Qureshi’s Seeking Allah, Finding Jesus(hereafter abbreviated SAFJ). I was lucky enough to be on the book release team and received an early copy. In all honesty I had limited exposure to Nabeel’s story in the past and was actually more familiar with his friend, David Wood,’s work. Granted through my exploration of SAFJ I felt as if I got to know them both much better. What follows is part review and part exploration of several issues that are front and center of Nabeel’s story.

Seeking Allah, Finding Jesus is a tremendously “bingable” book. My wife could easily sit down and read it in one long sitting. However, I have a much more ADHD approach in my reading and lucky for me this edition was written in a way that allowed me to read while following multiple rabbit trails on various topics before easily getting back on track with Nabeel’s story. The great thing about the chapters in this book is they all provide extra resources, many of which are contained in the back of the book. These resources allowed me to follow some of my sidetracked thoughts and greatly increased the overall “experience” of this read. The expert contributions are brief yet to the point and have helped shape this book into a resource for anyone interested in comparing Islam and Christianity.

I must also commend the many editing choices and overall structure of the book. The book is split into bite size chapters that made for a much easier read especially for those with a busy lifestyle who might have to frequently put down the book. In addition, its “definition” boxes for Islamic terms were helpful in expanding my knowledge of a belief system I was largely unfamiliar with. However, it kept these area’s contained enough that the reader never loses sight of Nabeel’s personal journey. By the end of the book I had already ordered a Quran and was comparing the translation I had picked up with the verses Nabeel would mention. This wasn’t necessary though given the honesty Nabeel used in the book however, this book wet my appetite for learning more about Islam so that I can better develop healthy friendships with Muslims in my community.

Nabeel’s respect for his upbringing and careful consideration in his writing bleed from the pages of this book and the reader can’t help but feel a deeper since of longing to engage and build relationships with Muslims. Nabeel’s own experience of 9/11 was a mirror image of what many Americans experienced and it gave me a new found respect for what Muslim Americans must have experienced on that dreadful day. In addition, Nabeel is an inspiring writer who no doubt will leave Christians with a drive to not only learn more about defending the faith but also a new drive to seek out and build bridges with Muslim friends and neighbors. The 3rdedition bonus materials are excellent and make the perfect accompaniment to an already great book.

I hope no matter your background you will consider taking this brief ride along with Nabeel through two of the most influential religions in the world. I have no doubt you will laugh, cry, and learn along the way.

Now, with that out of the way I would like to discuss a couple key insights from the book that are always playing in the back ground and keen readers will pick up on the importance. First, is the key that friendship plays into discussions of faith. I have many conversations with strangers and I quite enjoy all these conversation. However, my only hope with these conversations is to “place a stone in someone’s shoe”. The relationships that mean the most to me are those I’m closest too. However, that often makes having some of the same spiritual conversations I enjoy with strangers more difficult because of the closeness of the relationship. What we often neglect is that these are the relationships that have been divinely appointed for the purpose of bringing truth into someones life.

So how do you engage those closest to you in conversations that truly matter? What David and Nabeel found is that their friendship actually opened up their conversations to be more straight forward and allowed them to have greater freedom to discuss matters of importance. Do you find this to be true with the people you are closest with? I for one do not always find this to be the case. And yet Nabeel’s story is inspiring, not only am I inspired to do more in my personal relationships but I am also inspired to reach out more to strangers and begin building new relationships. Now keep in mind I’m not out searching for new contacts in a hope to convert them to Christianity.  No, I want to form genuine friendships out of a love for people and then out of that love I want to be granted the opportunity to share the gospel with them in a gentleness and respect not because of some obligation to do so. No; instead I want to share it because I care about them and I deeply care about their future.

Another nugget we gain from Nabeel’s journey is the importance of questions. David was constantly asking Nabeel questions. Questions led to exploration and encouraged him to seek truth even when it was difficult. If you ever need a resource to teach you how to ask the right questions you can’t go wrong with Tactics by Greg Koukl. Questions are a key to having productive conversations with people especially on spiritual matters. SAFJ drives home the importance of using tactics in spiritual conversations. Questions invite explanation without conflict. What harm is there in asking someone to explain their view? Most people are very willing and open to share their personal beliefs. Questions are a great way to open this up and furthermore to challenge their views politely.

For example, I recently heard someone profess that they where involved in receiving unique dreams that predicted the future (not to be confused with Nabeel’s chapters about his dreams). Some of the questions that first came to mind included, where are you receiving these dreams from? What do you think they mean? Do you think a higher power is some how involved? Etc….. questions like these could open up a spiritual conversation on a different level. Even though this conversation may not lead all the way to a profession of faith it would hopefully help to begin a spiritual conversation that could be continued later as well as pose a few meaningful thoughts that this other party would carry with them and use to question their own beliefs. Earnest truth seekers will always use thoughtful questions to their advantage just as Nabeel did.

Nabeel’s journey shows how important not only questions are but how important these questions are to peoples journeys to faith. Nabeel came to faith through years and years of questions. Some questions had a deep impact and while i suspect there were many others that never played a significant role in Nabeel’s journey. However, no matter how seemingly pointless the outcome David continued to question and challenge his view. Don’t neglect the power of questions among friends especially those who recognize that eventually the will be subjected to truth.

So with all this said I want to very briefly sum up the last few paragraphs in case you skipped around. In summation, SAFJ is a fantastic book that helps begin an exploration of both Islam and Christianity. In addition, we find some key insights that point to the importance of friendship and questions in the faith journeys of individuals. In does not take a genius to explore beliefs. All theists, and atheists for that matter, should be prepared to take a cold hard look at their beliefs and be willing to explore the possibilities and challenging questions that may throw those beliefs into chaos. However, out of seemingly chaotic events we often find some utterly amazing beauty. And that is exactly what Nabeel shows, life can be chaotic but beauty can be found in the person of Christ and what He means to you personally.

Be sure to check out Seeking Allah, Finding Jesus and Tactics. These were the key resources for this article. You can find out more about Nabeel Qureshi and pick up this or his other books at NabeelQureshi.com